We all have a few names whom we’ve learnt to “place faith” in, ‘cos we enjoyed their previous works. I guess Natsume Isaku is one such person for me, though I admit that her name isn’t among the top few I would say aloud first when asked for my favourites. My backlog of reads is worse than my games’ backlog, so I thought it would be good to do another double review right about now.

The couple in question in Ikasama Memori is Nakano and Tsuda, who used to be high-school classmates. But it’s only after 10 years from their high school days did they meet again by chance. Now, Tsuda is doing his dream job, part of small toy maker group which happened to be hired as a subcontractor by the large toy company Nakano works in. 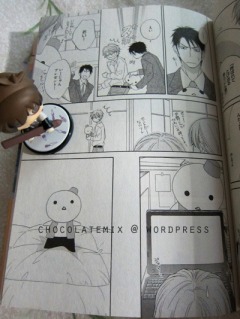 The catch is that Nakano has had a crush on Tsuda since their student days, and they even had an intimate incident once upon Tsuda’s initiation – no that they went all the way. But after that, Tsuda immediately accepted a confession from a girl to go out. This made Nakano realise that he wasn’t anyone special, and he decided to forget all about it, Tsuda and his feelings for him. He then cuts off all communication with Tsuda after their graduation. So their re-encounter certainly gives Nakano a large dosage of bitterness. Moreover, Tsuda treats him as per normal.

So, Tsuda appears like a jerk at first. But strangely by the end of the volume, he grew on me more than Nakano. Why? He’s a genuinely good guy who wants to maintain a good relationship with Nakano, who had been avoiding him previously. Tsuda presses on despite Nakano keeping his distance, such as stuffing him a stuffed toy he made (named Aladdin, lol), as if to remind Nakano of his presence. But he also knows when to back off as in the later parts.

On the other hand, Nakano just wants to draw the line between them. After all, he finally managed to cut away his painful attachment towards Tsuda after a long 10 years. So he dodges as much as he can, but still feels conflicted since deep down he still likes Tsuda.

You know where this is going, right? It’s a huge misunderstanding between them. Basically, Tsuda didn’t know how to face this growth of feelings towards his friend, since he nearly jumped him (though Nakano gave the okay for relieving each other). Feeling guilty to jerking off to that one-time experience ever since, Tsuda doesn’t want to break their friendship and goes out with a girl. But to Nakano, he sees this as a rejection prior even confessing his feelings, since Tsuda still treated him as per normal even after the incident. Now we all can predict how things will end, we’ve read enough to know. But it’s reading the process that makes things fun. Unfortunately, I felt that this story should’ve ended within one volume instead of going onto the next.

It’s very obvious that it’s mutual – yet even after Nakano accidentally spills his confession, he then denies that he still likes Tsuda. Tsuda eventually learns otherwise through  observation and attempts to confess the same back – but Nakano stops him and runs away, scared to hear any ugly truths. Now, I can understand this: sometimes the older we get, we also get more cowardly. Nakano was deeply hurt. But, the thing is, after the first chapter it’s all told through Tsuda’s narration. So I can’t help but emphatise with Tsuda more – his desperation, and determination to cling onto Nakano. Which is strange, ‘cos usually I emphatise more with the “receiver” guy. In this aspect, Ikasama Memori was great.

The volume ended up with something like the above. I really don’t wish to see an unnecessary third party in between the couple but well, I’ll still be reading Ikasama Memori through the end ‘cos I do enjoy Tsuda’s character. I wonder if I missed something out ‘cos I didn’t really feel the chemistry between them (yet). I hope that the 2nd volume will pleasantly surprise me! The extra in the 1st volume by the way, is the said sexy incident between the two. :3 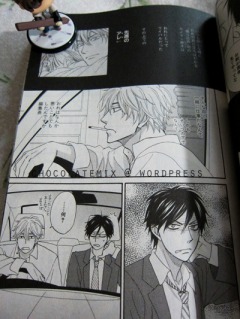 I then proceeded with Ameiro Paradox. Unexpectedly, it was a good thing I only read this a year after I bought it – ‘cos that means I only need to wait a few months till the next volume lol. I really enjoyed this! I think Onoe and Kaburagi may be my favourite couple ever from Natsume. To put it very simply, they are a ケンカップル (couple that fights…a lot).

Both of them work for the same magazine company, in which Onoe is a journalist and Kaburagi a photographer. Onoe has always seen Kaburagi as his rival (though it’s questionable if it’s mutual) but this is the first time they’re made to work together as a stakeout duo. Things couldn’t have been worse as Onoe had caught his ex hugging Kaburagi last week, and soon after he got dumped. Moreover, Kaburagi will do whatever it takes to get a scoop – manipulating connections, money, and even his own body. Onoe can’t comprehend this and they are at constant loggerheads (not one-sided on Onoe’s part).

But soon, Onoe learns that it’s not that simple. Kaburagi merely learnt how to cope with his job in his own way, a job that isn’t the most upright since you snoop around people’s privacy and post about their scandals. While this doesn’t justify his methods, it doesn’t mean that he’s a complete jerk either. It’s hard for me to describe the charm of both guys. Sure, Onoe appears like the typical loud tsundere, and Kaburagi as the aloof jerk whom deep down cares in his own way. But Kaburagi isn’t that bad a guy. And Onoe doesn’t irritate me, but in fact amuses me with his narration/monologues.

It’s great to see how he has the upper hand on Kaburagi in unexpected places too such as shown above: Onoe hears that Kaburagi has a habit of going up to smoke after a case is done, perhaps as a form of reflection. Onoe goes up and when Kaburagi remarks that he can break up with him as a team since they’re done with the first and last case, and that he knows he’s horrible etc. Onoe hugs him instead and says that he won’t do so, before leaving Kaburagi in surprise – and then proceeds to think to himself “WTF WAS I DOING” LOL.

To put my impressions very shortly: I loved the interactions, and chemistry between this couple. Onoe is the first to realise his growing feelings for the other side, and does act extremely tsundere after his personal revelation – but I can’t dislike him, he’s amusing to read. And even if he does screw up with a real bad misunderstanding, he himself also cleans it up himself quick enough. On another note, I enjoyed seeing the little juxtapositions. For example, Kaburagi acts very friendly among everyone else – except Onoe. Apparently it’s ‘cos he thinks that Onoe won’t grow to like him anyway, so there’s no need to lie and put up a front (as shown below). In a later chapter, Onoe questions why wouldn’t Kaburagi lie to him, and only him and…I shall let everyone find out the answer for themselves. ;3

Anyway, I think people will be pleasantly surprised at the end as the couple come to meet eye-to-eye and you do have some “action” lol. Since things seemed to end on a nice note in volume 1, I really wonder what volume 2 will bring us.

I think most people know what to expect from Natsume Isaku so I don’t really need to elaborate too much. Her stories don’t really have a quirky spin to them, they’re about regular people and the problems between them. But she does make the reading experience light-hearted and fun, and I notice that she makes the effort to craft a more unique setting so that her stories aren’t too similar to each other. Take these two titles for example. One involves toys while the other involves journalism. It’s like a little spice added in to enhance the flavour of the stories. Though personally, I like series to end as quickly as possible so that I don’t need to buy so many volumes – so I hope volume 2 is the last for both titles. 8’D I hope this review has been helpful for the curious people. 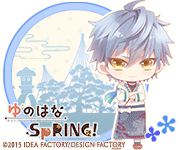